Australian scientists, working as part of an international team, have used a continent-sized telescope to accurately measure the distance to the first-ever know stellar-mass black hole candidate, Cygnus X-1, and revised the compact object's mass to be 50% heavier than originally thought.

From the mid-sixties and into the early seventies, as sounding rockets and satellites were heading into orbit and carrying Geiger counters, scientists started noticing a range of x-ray sources above Earth’s atmosphere, originating from distant astronomical locations.

The data from one of these instruments aboard the Uhuru satellite revealed something rather interesting about a particular x-ray source, which caught the attention of astrophysicists. It showed that whatever was giving off the x-rays, was fluctuating several times per second and that the object was relatively small – too small in fact (roughly 105 km in diameter) to be any of the bright stars that were within the region.

After careful inspection and localisation, a giant blue supergiant was found to be remarkably close to the source of the x-rays, but it was not the kind of object that should be giving off these x-rays. Instead, scientists observed the doppler shifts in the spectrum of this blue supergiant and found that a massive, compact, invisible was object was tugging it around space in a fairly tight orbit.

From these doppler observations, its mass could be deduced and was at the time found to be roughly 14 times the mass of the Sun, squeezed into an extremely small region of space. The object was too massive to be a neutron star and its size and energy output didn’t fit any model of other stars.

This was the first time a stellar-mass black hole candidate was observed. They called it Cygnus X-1.

Up until this point, Black Holes had remained the product of Einstein’s general relativity (GR), an outcome of theoretical equations that describe gravity, and in particular, what would happen to space-time if you squeezed enough matter into a small enough space.

So much so, that a famous scientific wager between physicists Stephen Hawking and Kip Thorne started in 1974 as to what Cygnus X-1 could actually be (Thorne bet it was a black hole, Hawking against), with the bet coming to an end in 1990 when Hawking caved in and conceded that it was indeed a stellar-mass black hole.

Now, in a new paper published in the journal Science, Australian scientists have worked as part of an international collaboration to measure the distance to Cygnus X-1 accurately, and from this determine its mass to greater precision – with the results leading to astronomers questioning what they know about these mysterious objects.

Using the Very Long Baseline Array – a continent-sized radio telescope made up of 10 separate dishes spread across the United States, the team used a technique that takes advantage of Earth’s orbit around the Sun known as parallax.

“If we can view the same object from different locations, we can calculate its distance away from us by measuring how far the object appears to move relative to the background,” said lead researcher, Professor James Miller-Jones from Curtin University and the International Centre for Radio Astronomy Research (ICRAR).

“If you hold your finger out in front of your eyes and view it with one eye at a time, you’ll notice your finger appears to jump from one spot to another. It’s exactly the same principle.”

“Over six days we observed a full orbit of the black hole and used observations taken of the same system with the same telescope array in 2011,” Professor Miller-Jones said. “This method and our new measurements show the system is further away than previously thought, with a black hole that’s significantly more massive.”

“Stars lose mass to their surrounding environment through stellar winds that blow away from their surface. But to make a black hole this heavy, we need to dial down the amount of mass that bright stars lose during their lifetimes” he said.

“The black hole in the Cygnus X-1 system began life as a star approximately 60 times the mass of the Sun and collapsed tens of thousands of years ago,” he said. “Incredibly, it’s orbiting its companion star—a supergiant—every five and a half days at just one-fifth of the distance between the Earth and the Sun.

“These new observations tell us the black hole is more than 20 times the mass of our Sun—a 50 per cent increase on previous estimates.”

Science Check: What are black holes?

Black holes are regions of space-time where gravity is so strong, that not even light can escape. Outlined as part of Einstein’s GR equations by Karl Schwarzschild, they describe any mass that can be squeezed into a small enough space – which in turn would cause the space-time around it to warp enough that even light could not escape.

Thankfully (for us), the process of squeezing matter down to these incredible densities requires a lot of energy – like that produced during a supernova event of a massive star, through a process known as a core-collapse supernova.

These events occur when high mass stars implode (because they can no longer support the inward pull of gravity through radiation pressure) and matter falls inwards towards the core at high velocities. Normally, sub-atomic forces such as electron and neutron degeneracy pressure would halt this collapse, resulting in the formation of either a white dwarf or a neutron star – but when the mass is greater than three solar masses, gravity wins the battle, and the materials keep collapsing inwards.

This creates an infinite point of density known as the singularity which then causes the warping of space-time out to a certain distance, known as the Event Horizon. To the outside world, this is the point of no return. Once anything crosses the event horizon, it will forever stay within there until the end of the Universe.

Black holes can also be classified into several categories depending on their mass, with two of these categories now observed through a number of different methods, whilst the other two remain hypothetical with no current observational evidence.

The first are tiny, theoretical black holes known as ‘micro black holes’ and contain roughly the mass of the Moon squeezed into a diameter only a couple of millimetres wide. In these objects the effects of quantum mechanics play a vital role, but to date, these have not been discovered.

One of the main types of black holes that exist – much like Cygnus X-1 - are stellar-mass black holes, which are the products of large stars collapsing into these compact objects. Studies of compact, x-ray sources and binaries, as well as gravitational-wave observations, have found numerous cases of evidence for this type of black hole.

Interestingly, the mass range of black holes observed through electromagnetic means, such as x-rays, fall between approximately three solar masses through to about 20 solar masses. However, data from gravitational wave observations indicate the masses of progenitor objects to be larger – with the majority of masses ranging between 20 – 80 solar masses.

Next up, are Intermediate black holes (theoretical) who are expected to have a mass range between 102 – 105 solar masses. Currently, there are several candidates being studies (esp. around measuring the velocity of gas flow around certain objects) to determine if these class of black holes do in fact exist. And special mention must go out to a single gravitational wave event known as GW190521 for this category, in which two progenitor black holes (85 and 65 solar masses respectively) merged and formed an object weighing in at 142 solar masses – which could be the first direct evidence of these mid-ranged black holes.

And lastly, there are supermassive black holes – extreme high mass objects that lie at the centres of most galaxies. These items weigh millions of solar masses and have been directly observed (including the first-ever image of the M87 black hole), as well as indirect observations (such as studying the velocities of stars orbiting near them).

Our galaxy, the Milky Way, has a supermassive black hole at its centre known as Sgr A* (pronounced “Sagittarius A-Star”) which weighs approximately 4.3 million solar masses.

The Cygnus X-1 system is a binary, featuring a stellar-mass black hole and a blue supergiant star orbiting a common centre of mass every 5.59 days, in a nearly circular orbit. It is located about 7,000 light-years away in the constellation of Cygnus.

Originally, the black hole was estimated to have yielded a mass of approximately 14 Suns, but this new work has now increased this mass range up to 21 solar masses. This dramatic increase in mass value is due to the special parallax observations made – by knowing its distance more accurately, its mass value was refined.

The black hole itself is surrounded by a high-velocity, thin, orbiting accretion disc, where infalling matter collides and through the process of friction, heats up to extreme energies, which in turn creates the x-rays that have been detected. The accretion disc itself is divided into two zones – a hotter inner region which forms a plasma, and a cooler, non-ionised outer region.

Due to its close proximity to the black hole, a large portion of the material released from this stellar wind is being captured and accelerated towards the black hole at 1500 km/s, sinking and orbiting into the accretion disc (and thus, causing the x-rays).

Interestingly, this system started off with two massive stars: HDE 226868 and another which ended its life first – collapsing into the black hole that is observed today. Some scientists even believe that the first star collapsed into the black hole without the supernova explosion, as such an event should have given the remaining star a ‘kick’ away from this system.

Cygnus X-1 has fascinated astronomers for decades because of the nature of the interactions between this pair of objects – a laboratory in which to study black holes and how they consume a nearby star.

As the world’s biggest radio telescope, the Square Kilometre Array eventually starts to come online later in the decade, systems like this will be able to be studied in unprecedented detail to reveal more about the complexities of compact, high-mass, objects like black holes.

“Studying black holes is like shining a light on the Universe’s best-kept secret—it’s a challenging but exciting area of research,” Professor Miller-Jones said.

“As the next generation of telescopes comes online, their improved sensitivity reveals the Universe in increasingly more detail, leveraging decades of effort invested by scientists and research teams around the world to better understand the cosmos and the exotic and extreme objects that exist.

“It’s a great time to be an astronomer.”

Read the paper in the journal, Science 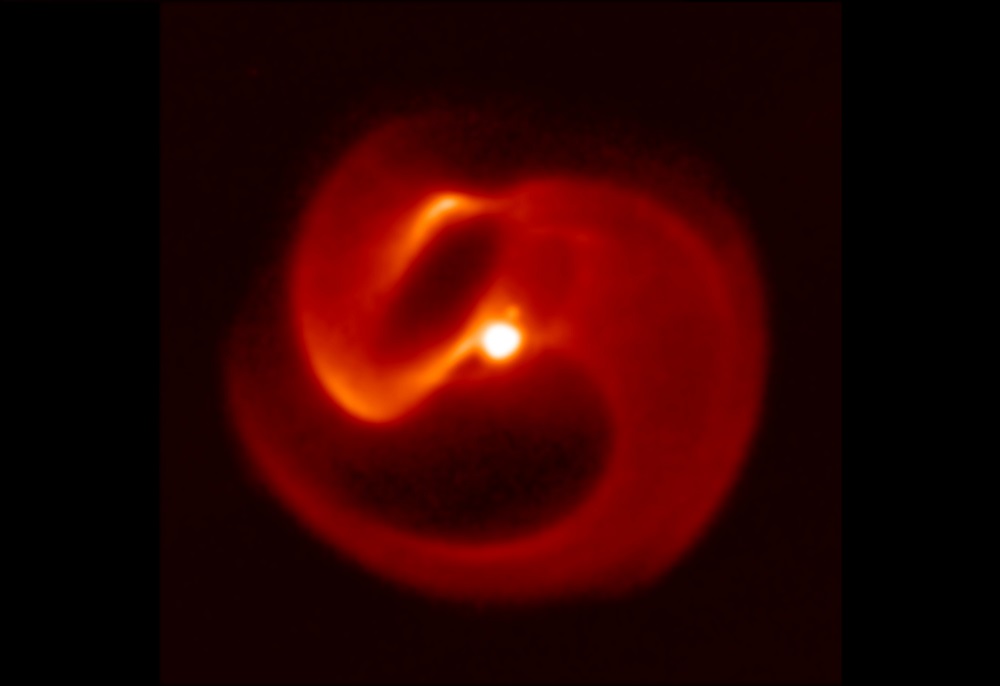 The Fierce Winds of the Double Wolf-Rayet System: Apep 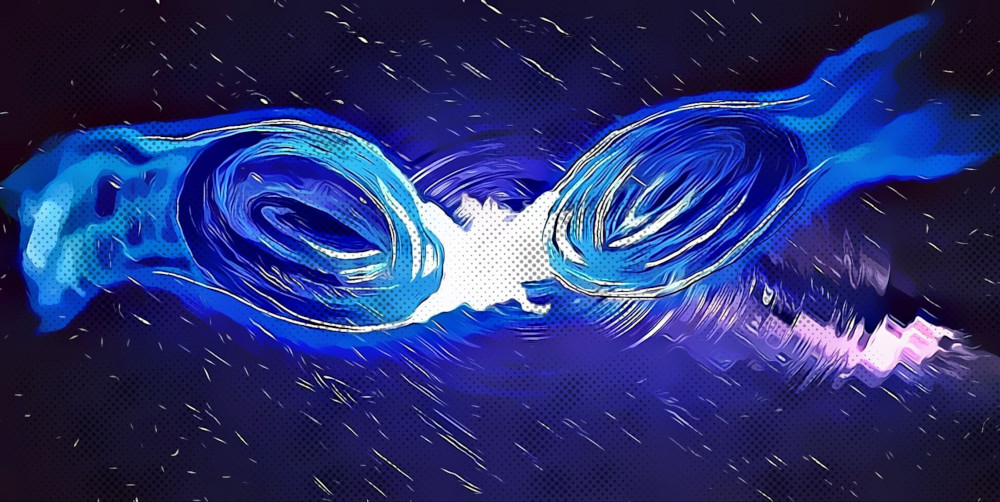 Black Holes or Boson Stars: The Mystery of GW190521 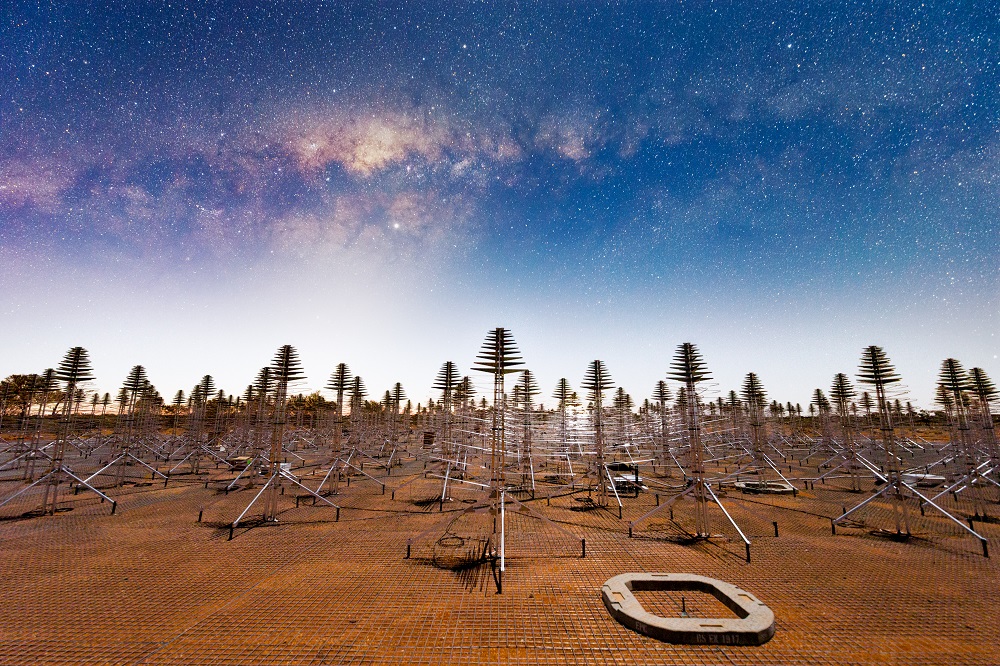 The Road that leads to the Square Kilometre Array