Using one of Australia’s most powerful radio telescopes, astronomers have undertaken a detailed look at one of the closest galaxies to our Milky Way, highlighting a range of different objects in delicate detail, as well as identifying distant galaxies behind the structure.

If you happen to visit or live under dark sky conditions in regional areas of Australia and New Zealand, you might have noticed that during the summer months, our Galaxy is joined in the southern sky by two neighbouring, yet smaller, fuzzy clouds of light.

These bright blobs have dazzled Indigenous astronomers for tens of thousands of years, and European explorers for the last few hundred – in fact, being named for Ferdinand Magellan after his voyage into southern seas in 1519.

Now, astronomers have used a prominent Australian telescope to study thousands of stars and nebulae within the Large Magellanic Cloud (LMC) in unprecedented detail, taking some of the sharpest radio images of the Cloud ever recorded.

But that’s not all they caught – by taking this detailed look at the LMC, scientists also captured what lies in along the line of sight (stars from the Milky Way), as well as lots of deep radio emissions from distant galaxies located many millions of light-years behind the LMC.

“Most of these are actually galaxies millions or even billions of light-years beyond the Large Magellanic Cloud. We typically see them because of the supermassive black holes in their centres which can be detected at all wavelengths, especially radio.”

“But we now also start finding many galaxies in which stars are forming at a tremendous rate. Combining this data with previous observations from X-ray, optical and infrared telescopes will allow us to explore these galaxies in extraordinary detail,” she said.

The findings are presented as part of the Evolutionary Map of the Universe (EMU) survey, which utilises the powerful ASKAP telescope, owned and operated by Australia’s national science agency, CSIRO, and located in the government designated radio-quiet zone in central Western Australia.

ASKAP is a precursor instrument to the SKA, which will become the world’s largest radio telescope, stretching across the Australian and South African continents. ASKAP’s interferometer is currently made up of 36 dishes, each 12-metres in diameter, spread across a vast region approximately 800-kilometres northeast of Perth.

“It’s gratifying to see these exciting results coming from the early EMU observations,” said leader of the EMU survey and co-author Prof. Andrew Hopkins, from Macquarie University’s Department of Physics and Astronomy.

“EMU is an incredibly ambitious project with scientific goals that range from understanding stars and galaxy evolution to cosmological measurements of dark matter and dark energy, and much more.”

To cover a wide range of science objectives, along with surveying the sky in high resolution in quick turnaround times, ASKAP uses technology known as phased array feeds, in which each of the 36 dishes has a special receiver that allows it to look in 36 different directions at once.

“The discoveries from this early work demonstrate the power of the ASKAP telescope to deliver sensitive images over wide areas of sky, offering a tantalising glimpse of what the full EMU survey may reveal. This investigation has been critical in allowing us to design the main survey, which we expect will start in early 2022,” said Prof. Hopkins.

Recently, the EMU project also released findings from their pilot survey, which mapped the southern sky at radio frequencies and finding a whole suite of astronomical treasures like the Dancing Ghosts galaxies, and a giant radio galaxy that exhibits features that stretch for 5 million light-years across space.

Due to the relative closeness of both Magellanic Clouds, they have been studied in great detail by astronomers, across a range of wavelengths. These galaxies both orbit our own Milky Way Galaxy, interacting with it along their journey, so present an excellent and up-close opportunity to learn about the dynamic exchanges that occur during galactic evolution.

One way that these interactions are studied is by observing the Magellanic Stream – a river of high-velocity gas that bridges both of these galaxies to our very own south Galactic pole, stretching 180-degrees across the entire sky.

Historically, the LMC has also played an important role in astronomy, with the establishment of the Cepheid period-luminosity relation by astronomer Henrietta Leavitt in 1908 which helps scientists determine the distance to the clouds using the regular brightness variability of the pulsating Cepheid stars.

On top of this, in 1987, astronomers around the world were given a special treat when a blue supergiant star detonated in a supernova – helping revolutionise our understanding of how massive stars die.

Whilst the LMC has been a popular target at all wavelengths, it has also been extensively studied by Australian radio telescopes, which include the Molonglo Observatory Synthesis Telescope (MOST), Australian Telescope Compact Array (ATCA), Murchison Widefield Array (MWA), and of course the Parkes radio telescope.

“When our 64-metre Parkes radio telescope was equipped with an innovative multibeam receiver, it opened up a new window of research,” said Prof. Bȁrbel Koribalski from CSIRO and WSU, co-author and founder of one of ASKAP’s other surveys - the WALLABY project. “Surveys that would have taken years could now be done much faster, in fact 13x faster thanks to its 13 closely-packed beams.”

“Thinking big, we mapped the whole sky visible to Parkes in the 21-cm spectral line of neutral hydrogen (HI), producing detailed maps of the giant HI stream between the Milky Way and the Magellanic Clouds as well as discovering a new HI leading arm, resulting from their gravitational dance / interactions.”

“In total, the HI Parkes All-Sky Survey (HIPASS) allowed us to detect more than 5000 galaxies in the Local Universe, measure their distances, mass and rotation speeds,” she said.

Observing the LMC with ASKAP

When radio telescopes look at the LMC galaxy, the radio emissions come from a number of different sources. One form of radio emission occurs when electromagnetic radiation is produced when a particle, like an electron, is decelerated when deflecting off another charged particle. This is known as free-free emission and occurs around the bright soft red glowing regions of where emission nebulae, where young bright hot stars are exciting the surrounding hydrogen gas.

Another form of radio emissions occurs as synchrotron radiation – when electrons are accelerated in magnetic fields, and when looking at the LMC, these are represented by ancient supernovae remnants, as well as background emissions from active galactic nuclei and star-forming galaxies.

To produce the results reported in this paper, ASKAP observed the LMC at a frequency of 888 MHz in April 2019, as part of the telescope’s commissioning and early science verification program. The total field of view covered by the telescope during this observation was 120-square degrees, roughly an area as big as 240 full moons in the sky. The resulting images produced for the paper were obtained by the operations team using the ASKAPsoft data processing pipeline.

A total of 54,612 sources were detected, which included radio wavelength observations of objects within the LMC such as planetary nebulae, young stellar objects, novae and supernovae, supergiant stars, and x-ray binaries.

Additionally, active radio stars that lie in the direction of the LMC but are a part of the Milky Way Galaxy were also observed, as well as a large number of more distant galaxy sources that are classified as active galactic nuclei and radio galaxies.

Whilst these distant objects are many millions of light-years behind the LMC, their detection is due to the powerful supermassive black holes at their cores, churning through local material causing them to shine bright across a range of frequencies, including radio wavelengths.

“ASKAP’s sensitivity and high resolution allow us to map the morphologies / shapes of radio sources which, together with images and spectra at other wavelengths, tell us their likely origin,” said Prof. Bȁrbel Koribalski.

“In the LMC itself, we found many beautiful shells of supernova remnants, which also glow brightly in optical images. Well beyond the LMC, we discovered several giant radio galaxies with double-lobes emerging from their central black hole. But there are still many unidentified radio sources in our ASKAP images.”

The paper is now available in the journal, MNRAS. 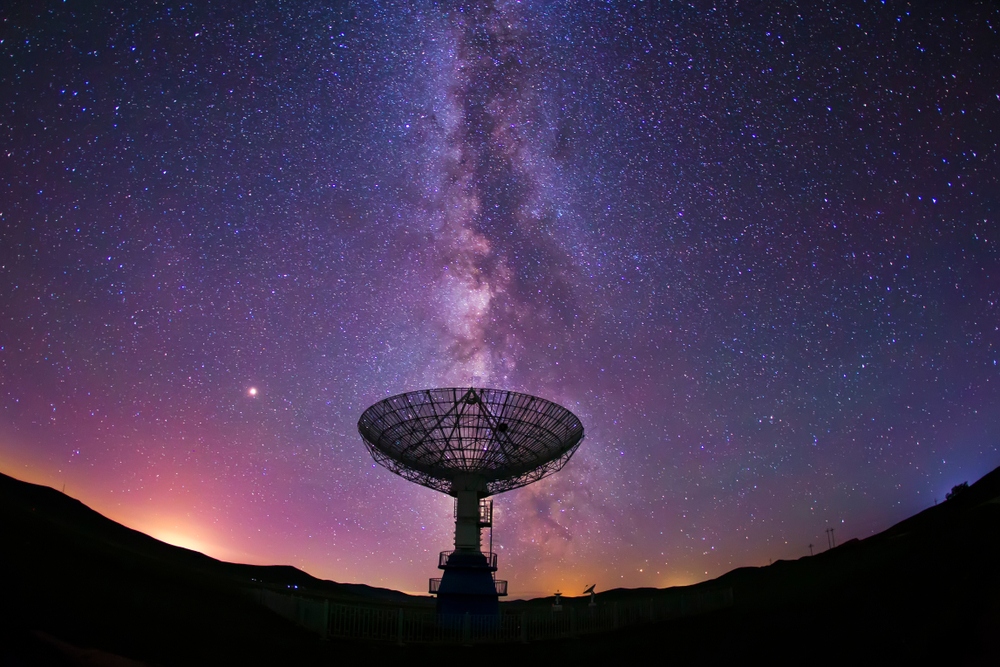 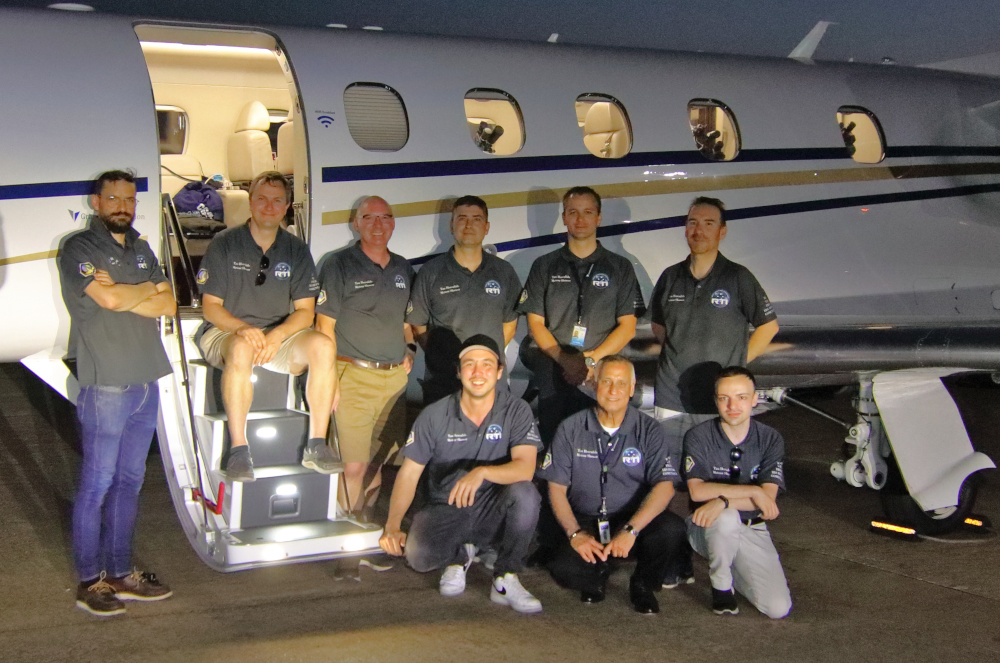