A new study of lunar rock samples brought back from the Moon by the crew of Apollo 17 is forcing scientists to question what we know about the very young Solar system, and demonstrating the scientific value of sample return missions to other planetary bodies…

Scientists are learning more about the origins of the Solar system by looking at our nearest planetary neighbour. A recent study that made use of high-tech equipment at Curtin University in Western Australia may change our understanding of an event that occurred some 4-billion years ago.

Imagine for a minute what it would be like to be an astronaut. Do you picture a daring explorer at the forefront of humanity’s quest to understand our origins and uncover the secrets of the Solar system? Or do you see yourself as a rock collector?

The astronauts who landed on the Moon during the Apollo era were both – fearless adventurers and part-time geologists. NASA made a point of giving them enough training on Earth to make sure they could identify and collect rocks on the Moon. Landing on the Moon and returning to Earth might have been the primary objective of Apollo 11, but collecting rock samples was a close second.

That’s why X-15 test pilot Joe Engle lost his seat as the Lunar Module Pilot for Apollo 17 and was replaced by Harrison Schmitt, a professional geologist and the second last human to set foot on the Moon. Engle overcame his very understandable disappointment and went on to fly as commander of the Space Shuttle, logging over 225 hours in space.

Schmitt, though, performed his job with the utmost skill and professionalism and proved beyond doubt that scientists could be trained to be astronauts while retaining their expertise and scientific knowledge. At one point he worked for 30 minutes near a large, fragmented boulder on the Moon, managing to decipher its complex story down to small details that would have been difficult to discern even in a laboratory.

This was indeed the closest NASA has ever come to reproducing the spirit of a terrestrial geological field trip.

All-in-all, the Apollo 17 crew brought back 741 individual rock and soil samples, including a core sample of material from 3-m below the lunar surface, from their landing place, the Sea of Serenity. Scientists are still studying the rocks to this day, with NASA opening a new batch of pristine samples as recently as November 2019.

So, what are a bunch of old Moon rocks good for anyway? Is there anything left for us to learn?

Well, of course, you know the answer to that already. Science doesn’t stand still for a minute – and neither does technology.

With new methods and more advanced equipment, scientists can make measurements that simply were not possible 50 years ago. And they get to practice their techniques in preparation for future samples that will be collected on Artemis missions.

Some of the most interesting science to come from these lunar rocks is about a period very early on in the Solar system’s history when Earth and the other planets of the inner Solar system (Mercury, Venus, and Mars) were being pounded by a barrage of asteroids. The cataclysmic scenario has direct implications for the origin of life on our planet, and what conditions were like at the time.

The horrific episode is known as the Late Heavy Bombardment or LHB, late because it was not the first time it happened, and heavy because of the relatively high frequency of collisions. Evidence of the event on Earth is non-existent because our planet’s tectonic and atmospheric processes quickly obscure or destroy craters.

That’s why scientists look to the Moon.

By counting and dating craters they can put together a story of what happened and when. The lunar samples have been invaluable for that, with the three largest crater basins on the Moon’s near side – Imbrium, Nectaris, and Serenitatis – all though to be about 3.95-billion years old.

Around that time, the giant outer planets (Jupiter, Saturn, Uranus, and Neptune) are thought to have been much more closely spaced than they are now. Encounters with planetesimals left over from the formation of the Solar system caused an exchange of angular momentum that resulted in them migrating to their present positions.

The chaos unsettled asteroids and distant comets, forcing them into orbits that intersected with the inner planets. Simple crater counts of the Moon agree very closely with this theory.

But just when it seemed as though we had a handle on the LHB, photos of debris radiating from impact craters on the Moon seemed to suggest that the samples collected by the Apollo 17 crew from Serenitatis, the Sea of Serenity, might really have been rubble from the impact that formed Imbrium.

If that’s the case, it could throw out the theory that those three large lunar craters all formed around the same time, during a period of heavy bombardment.

And with inconclusive results coming from the other supposed victims of bombardment, like the inner planets and asteroids, how are we to find out whether the LHB happened or not? We need to return new samples from the Moon.

And that is just what will happen courtesy of Artemis III some time in late 2024. Artemis III is planned to be the first crewed lunar landing since Apollo 17 in 1972 and is expected to return 35-kg of rock and soil samples.

But until then, scientists need to content themselves with studying our existing cache of specimens. And a global research collaboration involving scientists and equipment from Curtin University have been doing exactly that.

The team took samples 78235 and 78236, two extensively studied lunar rock fragments, and used a technique known as atom-probe tomography to observe the minerals in the rocks at atomic scales. They found encoded into the rocks, evidence of an impact event from around 4.2-billion years ago, only about 350-million years after the formation of the Solar system itself.

A second impact transported the rock to a new resting place where it stayed put for 0.5-billion years until two humans, Schmitt and Commander Eugene Cernan, picked it up and brought it back to Earth.

What all of this suggests is that the LHB must have been a more drawn-out affair, perhaps even the long, declining tail of bombardment continuing on from the birth of the Solar system. Scientists are beginning to think that the idea that the LHB was a sudden deluge of asteroid impacts is simply not correct.

An interesting result, and a testament to the men who stood on the surface of the Moon nearly 50 years ago and chipped the top off a small glass-covered boulder perched on top of the lunar regolith.

And an excellent demonstration of why we need more space missions capable of returning samples to Earth.

The paper appears in the journal Nature...

Lunar samples record an impact 4.2 billion years ago that may have formed the S… 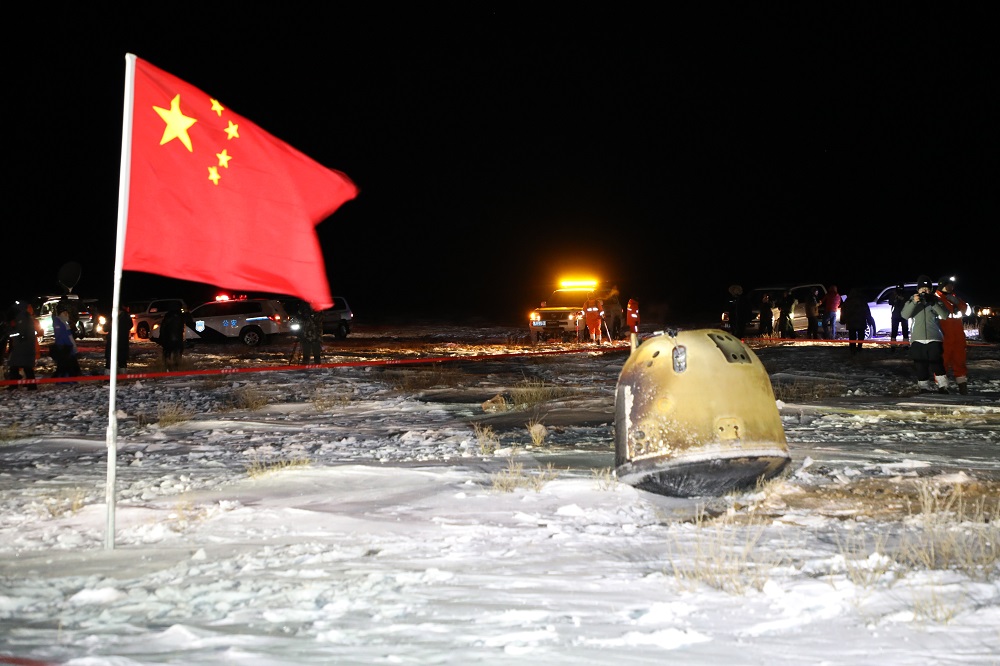